It is known that specific limit of animal and human lifespan is approximately 30-40% higher than their mean lifespan. It could be referred to the impact of adverse factors causing changes in the gene structure and expression accompanied by disorders in the protein synthesis and organism functioning (Fig. 1).

Fig. 1. Potential increase in the average human lifespan up to the specific limit (biological reserve).

At the beginning of the 1970ies we studied the mechanism of immunodepression both experimentally and clinically. We found out that with ageing there takes place an involution of the central organ of immune system – thymus (Fig. 2, 3) and that of the neuroendocrine system – pineal gland. We also registered definite decrease of protein synthesis in cells of different organism tissues (Fig. 4).

Subcapsular cortex area (open biopsy, a 2-year old child).
A – hematoxylin and eosin staining;
B – thymic poly bio regulators fluorescence in the bodies and processes of epithelial cells forming Klark’s alveoli, as well as granules on the thymocyte membranes inside alveoli.

Fig. 4. Protein synthesis in hepatocytes of rats of different age.

Fig. 5. The increase in the average lifespan up to the specific limit after bio regulator preparations application (mean results after 15 experiments).

Fig. 6. Bio regulator preparations effect on mean lifespan and reaction of blast-transformation of lymphocytes with phytohaemagglutinin in mice.

A significant increase in the mean lifespan of animals was evidently caused by a reliable antitumoral activity (Fig. 7) of low-molecular bio regulators isolated from thymus and pineal gland [14, 15, 17, 18, 19].

Fig. 7. Effect of pineal gland preparation on the frequency of tumor incidence in animals.

Small bio regulators isolated from different organs and tissues as well as their synthesized analogues (di-, tri-, tetrapeptides) revealed a realiable tissue specific (gene specific) effects both in cellular cultures and in experimental in young and old animals (Fig. 8).

Fig. 9. Effect of the liver and pineal bio regulator preparations on protein synthesis intensity in hepatocyte monolayer culture in rats of different age.

Especially significant appeared restoration of reproductive function system in old female rats subjected to the pineal bio regulator treatment (Fig. 10) [13]. Estrus phase in animals, analogous to menopause in women, lowered from the initial 95% down to 52% after the preparation administration, while other phases of the cycle, typical of the normal estrus, increased from the initial 5% up to 48%. It should be emphasized that in a special experiment initially none of the rats got pregnant after mating. Repeated mating after the administration of the pineal gland bio regulator entailed pregnancy in 4 out of 16 animals which gave birth to 5-9 healthy off-springs each.

A detailed study of molecular weight, chemical properties, amino acid composition and sequence of low-molecular bio regulators isolated from thymus, pineal gland and other organs had been carried out for many years [22, 23, 24, 25, 26]. The obtained data were used for chemical synthesis of several small bio regulators. A comparative analysis showed that biological activity of natural and synthetic preparations was largely identical. Thus, for example, thymus dipeptide stimulated immunity [24, 25]. Biological activity of natural and synthetic bio regulators appeared to be similar in standard testing in tissue cultures and in animals [27, 28, 29, 30]. These results demonstrate prospects for application of these bio regulators as geroprotectors [31, 32, 33]. The necessity of searching for new drugs – geroprotectors dictated the onset of preclinical studies of these preparations on different structural levels.

On the level of the organism in different animals we have registered a significant variety of biologic effects exerted by small bio regulators especially by bio regulators of thymus and pineal gland, including proliferative activity and apoptosis [34, 35, 36, 37, 38, 39, 40, 41, 42].

On the level of cellular structures, small bio regulators activate heterochromatine in the cell nuclei in senile patients (Table 1) [11, 43].

Effect of bio regulators on chromatin in lymphocytes of old humans

The capability of bio regulators to induce polypotential cells differentiation is of special significance (Fig. 11) [42]. Thus addition of retinal bio regulators to polypotential cells of Xenopus laevis early gastrula ectoderm led to the emergence of retinal and pigment epithelium cells. This outstanding result explains a pronounced clinical effect of the preparation of the retina in patients with retinal degenerations [42] and in animals with genetically determined retinitis pigmentosa.

On a chromosome level the number of chromosomes aberrations was used a marker of DNA damages in an ageing organism. Somatic mutations can occur due to accumulation of stable aberrations and underlie age-related pathology, including malignant neoplasia. Reliable antimutagenic and reparative activity of thymus and pineal gland bio regulators have been confirmed by a reduction in the number of chromosome aberrations in the bone marrow cells and cornea epithelium cells in animals revealing accelerated ageing [45].

On the level of gene activity regulation it was established that administration of bio regulators Lys-Glu and Ala-Glu-Asp-Gly to transgenic mice caused a 2–3.6-fold suppression of HER-2/neu gene expression (human breast cancer) as compared to the control group. This suppression is accompanied by a reliable reduction of the tumor diameter (Fig. 12) [41].

Fig. 12. Bio regulators effect on the development of mammary adenocarcinoma and HER-2/neu oncogene expression in transgenic mice (the study was conducted in cooperation with the National Research Centre on Ageing, Ancona, Italy).

It was revealed that addition of tetrapeptide Ala-Glu-Asp-Gly to the cultural medium of human lung fibroblasts induces telomerase gene expression and contributes to a 2.4-fold lengthening of telomeres. Activation of gene expression is accompanied by a growing number of cellular divisions (by 42.5%), which is the evidence of Hayflick’s limit overcoming (Fig. 13) [46, 47].

The effect of di- and tetrapeptides Lys-Glu, Glu-Trp, Ala-Glu-Asp-Gly, Ala-Glu-Asp-Pro on the expression of 15 247 murine heart and brain genes before and after bio regulators administration was studied with the employment of DNA-microarray technology [48]. In this experiment, there were used clones from the library of the National Institute on Ageing, USA. This experiment provided unique data on alteration in the expression of different genes under the effect of bio regulator preparations (Fig. 11). An important conclusion driven from the experiment was that every bio regulator specifically regulates particular genes. Results of this experiment testify to the existing mechanism of bio regulator regulation of gene activity. It was also registered that dipeptide Lys-Glu, showing immunomodulating activity, regulates gene interleukin-2 expression in blood lymphocytes [49].

Fig. 13. Overcoming human somatic cell division limit due to introduction of the bio regulator into the culture of the pulmonic fibroblasts.

Fig. 14. Bio regulator effect on gene expression in the heart of mice (the study was conducted in cooperation with the National Institute on Aging, Baltimore, USA).

On the molecular level, there was an obvious gap between multiple evidence of specific effects, caused by regulatory bio regulators in activation of gene transcription [50, 51, 52, 53, 54, 55, 56, 57, 58], and limited schemes of the process underlying the selective binding of the transcription factor with specific DNA sites. Meanwhile non-specific binding of proteins with the DNA double helix was proved using physicochemical methods [59]. Activation of gene transcription in cells of higher organisms as a rule needs dozens of macromolecular activators and transcription factors.

Geometrical and chemical complementarity of bio regulator amino acid sequence and DNA nucleotide pairs sequence was assumed as a basis for the molecular model. Regulatory bio regulator recognizes a specific site in the DNA double helix if its own amino acid sequence is complementary to the DNA nucleotide sequence for a sufficient length. In other words their interaction is specific due to matching sequences.

Fig. 19. HPLC of bio regulator and DNA on sefadex G-25 in physiological solution at room temperature.

Complementary binding of the bio regulator with nucleotides sequence on the leading strand TATATA of the double helix can be conducted by six hydrogenous and one hydrophobic bonds between functional groups of the both participants.

It was experimentally revealed that detachment (melting) of free DNA strands occurs at the temperature +69.50С. In the “DNA-tetrapeptide” system melting of the double helix occurred at the temperature +28°С and was characterized by approximately 2-fold decrease in the values of entropy and enthalpy. This fact points out a thermodynamically simplified way of the DNA strands separation in temperature settings typical of biochemical processes of the majority of living organisms. In vitro experiments show that a small bio regulator of the definite structure and amino acid sequence can participate in activation of genes transcription on the stage of strands disjunction in the DNA double helix. Biochemical aspect of this phenomenon consists in similarity of structure and amino acid sequence of a regulatory bio regulator and a specific segment of the bio regulator chain of the macromolecular transcription factor.

Taking into consideration a reliable biological activity of bio regulators we found it reasonable to study the effect of regulatory bio regulators in monkeys. Restoration of the melatonin level up to normal following the administration of the bio regulator preparation to old monkeys was among our significant achievements.

Fig. 21. The bio regulator effect on melatonin production in monkeys of different age.

The same old monkeys revealed a restoration to normal indices of a daily rhythm of secretion of the main hormone of adrenal gland – cortisol (Fig. 22).

Fig. 22. The bio regulator effect on cortisol production in monkeys of different age (in the morning and in the evening).

Taking into consideration the encouraging data testifying to high geroprotective activity of both natural tissue specific and synthetic bio regulator preparations we have been concentrating our attention on studies of geroprotective activity of bio regulators in old and senile people in recent years [42, 57, 71, 72, 73, 74, 75, 76]. Thus, annual treatment course with thymus and pineal preparations led to a reliable decrease in mortality (Table 2), due to improvement of brain function and that of immune, endocrine, cardio-vascular systems, increased density of osseous tissue (Fig. 23, 24) [42, 57, 71, 72]. It is noteworthy that application of preparation of the thymus led to a 2-fold decrease in frequency of acute respiratory disease (Fig. 25) [57]. The restoration of melatonin secretion level in patients subjected to administration of preparation of the pineal gland is of special significance (Fig. 26) [71, 71]. These results suggest good prospects for tackling demographic issues [77].

Fig. 24. Dynamics of reaction of blast-transformation of lymphocytes with phytohaemagglutinin index in elderly patients in 3 years after 6 courses of bio regulator preparations.

Fig. 26. Effect of the pineal gland preparation on melatonin level in elderly people.

The mechanisms of ageing studies showed that an involution of the main organs and tissues of the organism accompanied by a decrease of protein synthesis in cells underlies the process of ageing.

Bio regulator preparations isolated from organs of young animals when introduced into an old organism are capable of inducing protein synthesis, followed by restoration of the main functions.

It was registered that long-term application of bio regulators, both isolated from the organs and synthesized from the amino acid, in animals (as a rule starting from the second half of their life) leads to a reliable increase in their mean lifespan by 20-40% and reaching a specific limit.

It was revealed that small bio regulators (di-, tri- and tetrapeptides) are capable of complementary interaction with the DNA specific binding site on the promoter segment of genes, inducing disjoining of double helix strands and RNA polymerase activation. Discovery of the phenomenon of bio regulator activation of gene transcription points out the natural mechanism of organism to maintain physiologic functions, which is based on the complementary interaction of the DNA and regulatory bio regulators. This process is fundamental for the development and functioning of the living substance (Fig. 27, 28), while ageing is an evolutionary determined biologic process of age-related changes in gene structure and expression.

Application of bio regulators in humans for preventive purposes led to a significant rehabilitation of the main physiological functions and a reliable mortality decrease in different age groups during the period of 6-12 years.

Fig. 27. The role of bio regulators in the cycle of DNA, RNA and protein biosynthesis. 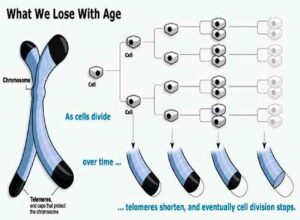