Pinealon is a dietary supplement with a synthetic brain peptide. It supports brain function by reducing its peptide deficiency by supporting protein synthesis within its cells. Pinealon is recommended for anyone whose brain may deteriorate, especially the elderly and people with poor memory, attention deficit, brain injury, stroke, high stress, chronic fatigue, depression, insomnia, irritability or diseases such as Alzheimer’s, Parkinson’s, Multiple Sclerosis, Neuralgia, Neuritis, Encephalopathy and demyelinating disease. It is also useful for persons whose occupation requires full attention.

Pinealon is a dietary supplement with a synthetic brain peptide. It supports brain function by reducing its peptide deficiency by supporting protein synthesis within its cells.

It is also useful for persons whose occupation requires full attention. Pinealon can be combined with other dietary supplements and medicines and should be used in addition to conventional medical treatments.

Pathology of the central nervous system is most often develops after trauma, infections, cardiovascular and metabolic diseases, and is accompanied by a significant reduction in quality of life.

All reactions that occur after cerebral lesions, considered as a collection of pathological and compensatory-adaptive processes that occur during regular intervals. Factors contributing to the development of diseases of cerebral structures are different; therefore, for the correction and prevention of brain disorders that occur during central and peripheral nervous system diseases, for the brain we have developed a bioregulator – PINEALON®.

Pinealon is a peptide complex that contains amino acids that contribute to the normalization of the functional activity of brain cells.

A clinical study has demonstrated that Pinealon prevents and treats patients with impaired function of the brain, including after a traumatic brain injury, stroke, brain surgery, effects on the body of extreme psycho-emotional factors, as well as to maintain the mental health of elderly and old aged patients.

In patients with the effects of traumatic brain injury and stroke, there was a moderate setback focal symptom, improved functions of speech, loss of muscle spasticity.

Pinealon is well tolerated, with no identified side effects, complications, contraindications and drug dependence. 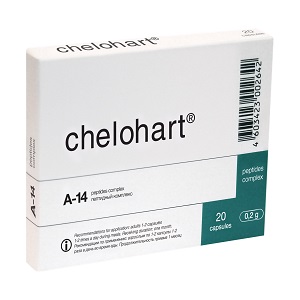 Natural Peptide Bioregulator – Normalizes the function of your cardiovascular system

Helps to regulate the HEART and combat heart-related conditions such as coronary artery disease, hypertension, hypertonia, myocarditis, atrial fibrillation, and heart failure. It, therefore, helps with stress and may be used with a number of other peptides including Ventfort and Svetinorm for heart failure.

CHELOHART® is a complex of peptide fractions extracted from a cardiac muscle of young animals. Such peptides regulate the function and metabolism in a myocardial cells, normalize metabolism in cardiac hystiocytes.

Testoluten is a dietary supplement with natural testicle peptides. It normalizes the function of the testicles by reducing their peptide deficiency and supporting protein synthesis within their cells. In the male reproductive system, aging changes occur mainly in the testicles. Testicular tissue mass decreases, and the level of male sex hormone testosterone is reduced, which reduces sexual activity. Problems with getting erections become more common with age. This usually gives significant psychological consequences to most men. Testoluten is recommended for every man over 40, especially those with low testosterone and libido, erectile dysfunction and male infertility. 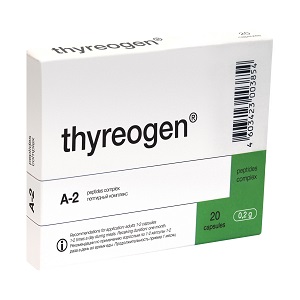 Thyreogen is a dietary supplement with natural thyroid peptides. It normalizes the function of the thyroid gland by reducing its peptide deficiency and supporting protein synthesis within its cells. The thyroid gland affects almost all tissues in the body because it regulates cell metabolism – the ability to break down the food and transform it into energy. When the thyroid gland does not work properly, the consequences can be very serious. One of these adverse effects is hyperthyroidism, which may cause weight loss, anxiety or nervousness, increased sweating, tremor, diarrhea, palpitations, muscle weakness and heat intolerance. Hypothyroidism, another thyroid disorder, can cause fatigue, weight gain, depression, drowsiness, dry skin, cold intolerance, voice change, change in menstrual periods and muscle cramps. Thyreogen is recommended for all over 40, especially women around menopause and people with thyroid disturbances or iodine deficiency. 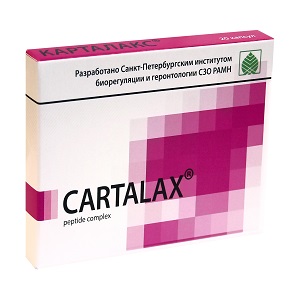 The joints and the spine are often the most vulnerable places in the human body. Back pain even affects teenagers today. However, the most affected are people over the age of 35, especially women who wear high-heeled shoes and men who work hard physically. Blood cells are created in the bone marrow. From there they are taken to the body where they mature and further developed. The cells in the bone marrow are thus immature, while the cells in the blood are in different maturation stages. There are also blood cells in our tissue. Without bone marrow, our bodies can not produce white blood cells that we need to fight infection, the red blood cells we need to carry the oxygen or platelets we need to stop bleeding. Certain diseases and treatments can destroy the bone marrow, which causes the body to not create new blood cells. Bonomarlot is a dietary supplement with natural bone marrow peptides. It supports bone marrow function by reducing its peptide deficiency and supporting protein synthesis within the cells. Bonomarlot is recommended for all whose bone marrow is deteriorated, especially older people and people with anemia and cancer. Bonomarlot can be combined with other dietary supplements and medicines and should be used in addition to conventional medical treatments. Active substance: peptide complex A-21 (peptides of parathyroidoid) Excipients: microcrystalline cellulose (E460), gelatin, beetroot sugar, lactose, starch